Similar to other languages, though, where data is stored can greatly affect how quickly it can be accessed later in JavaScript. There are 4 basic places which data can be accessed:

When dealing with scope, we must consider performance as well. That's why we should understand exactly how scope works before, and how speed relates to scope.

In JavaScript, any function is represented as an object, which will have accessible properties or not accessible like [[Scope]]. The internal [[Scope]] property contains a collection of objects, representing the scope in which the function was created. This collection is named the function's Scope Chain, which will determine the data that a function can access. Objects in the Scope chain are called Variable Objects, each of which will contains entries for variables in the form of key-value pairs.

Like the function add(), its Scope Chain will contain an object, which is pointed to the Global object, which means that this function is created at the global scope:

Suppose that the following code is executed:

Executing the add() function will trigger the creation of an internal object called Execution Context, which defines the environment in which a function is being executed. After a function has been completely executed, the execution context will be destroyed. 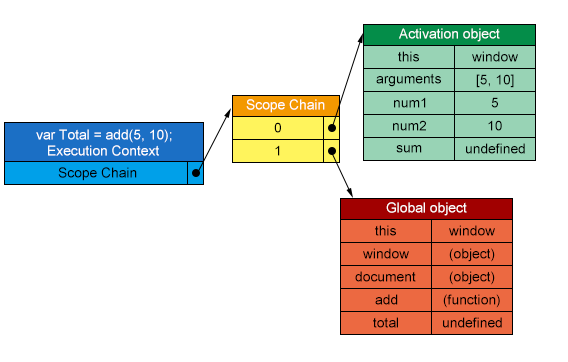 What we can see above is that the activation object has been pushed to the front of the scope chain, and it will be destroyed as the execution context is destroyed.

Variable identifying will search the scope chain, and is deemed to be undefined when none is matched. It's this search process that affects performance.

Two variables with the same name may exist in different parts of the scope chain. In that case, the identifier is bound to the variable that is found first in the scope chain traversal, and the first variable is said to shadow the second.

Consequently, local variables are always the fastest to access inside of a function, whereas global variables will generally be the slowest. As the depth grows, the time of this process will grow as well.

So, it's advisable to use local variables whenever possible to improve performance in browsers without optimizing JavaScript engines. Consider the following example:

This function contains three referencs to document, which is a global object. In order to reduce the cost of accessing it, we are recommended to code like that:

Though we won't change an execution context's scope chain, we can also temporarily augment the scope chain while it's being executed with two statements. The first of these is with, which is usually seen as a convenience to avoid writing the same code repeatedly.

Though this may seem more efficient, it actually creates a performance problem. While executing the with statement, the execution context's scope chain is temporarily augmented. A new variable object is created containing all of the properties of the specified object, like document here, which will be pushed to the front of the scope chain. That means local variables are now in the second scope chain object, make it more expensive to access. 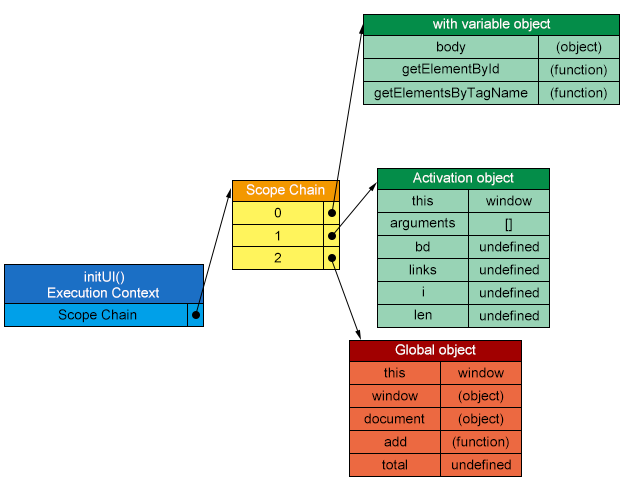 Besides with statement, the try-catch statement also has the same effect:

However, since try-catch statement is still useful for us, we are recommended to use it when we have met some error we do not know. To minimize the performance impact by executing as little code as necessary within it, we can use a method to handle this error. Since there is just one statement executed and no local variables accessed, the temporary scope chain augmentation does not affect the performance of the code.

Both the with statement and the catch clause of a try-catch statement, as well as a function containing eval(), are all considered to be Dynamic Scopes. A dynamic scope is one that exists only through execution of code and therefore cannot be determined simply by static analysis.

You will probably say that w should be the window object. However, it may not when I call like this, and w will be equal to the local object rather than the global one:

Some optimizing JavaScript engines such as Safari's Nitro try to avoid the traditional scope chain lookup by indexing identifiers for faster resolution. When a dynamic scope is involved, however, this optimization is no longer valid. In reverse, the engines should take more cost to switch back to a slower approach. For this reason, its recommended to use dynamic scopes only when absolutely necessary.

There may be a performance impact associated with using closures.

When assignEvents() is executed, an activation object is created that contains, among other things, the id variable. When the closure is created, its [[Scope]] will be also initialized with this object. That's where a side effect is. 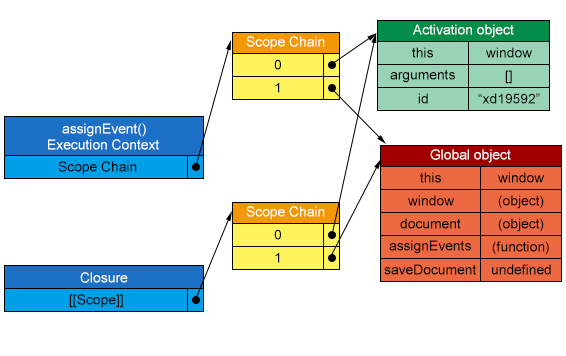 When there is a closure involved, though, the activation object can not be destroyed after the function has been executed, because a reference still exists, which results in more memory overhead. When it comes to a large web application, it will be a disaster for that application. Especially where Internet Explorer is concerned. IE implements DOM objects as non-native JavaScript objects, in which closures will cause memory leaks.

Using closures will bring out another performance problem. When the closure defined above is executed, an execution context is created whose scope chain is initialized with the same two scope chain objects referenced in [[Scope]], in which the activation object of this closure will become the first one in the scope chain. It means that each time you access id and saveDocument, you have to access a lot of out-of-scope identifiers. 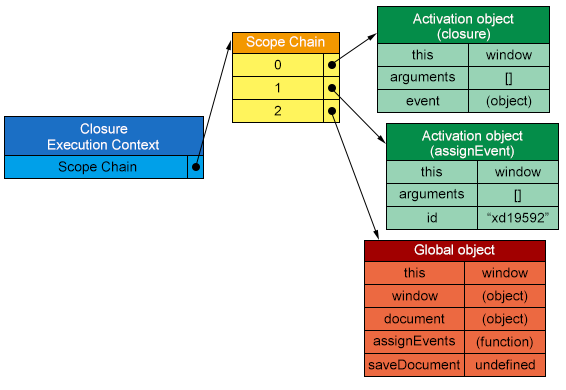 Objects in JavaScript are based on prototypes. A prototype is an object that serves as the base of another object, defining and implementing members that a new object must have.

An object is tied to its prototype by an internal property. Firefox, Safari, and Chrome expose this property to developers as __proto__; other browsers do not allow script access to this property.

An object can have two types of members: instance members (also called "own" members), and prototype members. Consider the following object book:

The book object has two instance members: title and publisher, while toString() is a prototype member that book inherited from Object.

By default, all objects are instances of Object and inherit all the basic method. In order to create a prototype of another type, we can define and use a constructor:

Searching members will go through this chain. For example, when book1.toString() is called, the search must go deeper into the prototype to resolve the object member toString. Therefore, deeper the search go into, more overhead will be taken to complete this search. Just keep in mind that the process of looking up an instance member is still more expensive than accessing data from a literal or a local variable.

In some cases, we will use [] to access members of an object. Here is a point we should know:

In most browsers, there is no discernible(明顯的) difference between using [] notation and . notation. However, in Safari, . notation is consistently faster than using [].

Since performance issues related to object members has existed, it's advised to avoid using this only when necessary. For instance, there's no reason to read the value of an object member more than once in a single function:

Instead, we should use a local variable, which can be accessed faster, to store this value:

It's not recommended to use this technique for object method. Because when changing the value of this will lead to programmatic errors.

There are four places to access data from: literal values, variables, array items, and object members. These locations all have different performance considerations.