In this tutorial we will learn how to morph one face into another using OpenCV.

I have chosen to use the photos of the top three American Presidential candidates, but this is not a political post and I have no political agenda. And yes, that is the prettiest picture of Donald Trump I could find!

You can download the code and images used in this post by subscribing to our newsletter here.

In my previous posts I have covered Facial Landmark Detection and Delaunay Triangulation. It is a good idea to review those posts to better understand this one.

Image morphing was first used extensively in the movie Willow using a technique developed at Industrial Light and Magic. A scene from the movie is shown below.

However, using the above equation to generate a blend between the image of Secretary Hillary Clinton and Senator Ted Cruz with $$\alpha$$ set to 0.5, you will get the following terrible results.

The resulting image is disturbing, but it also screams a solution at you. It begs you to somehow align the eyes and the mouth before blending the images. You get similar disturbing results when you try to blend two different political ideologies without first aligning the minds, but I digress.

So, to morph image $$I$$ into image $$J$$ we need to first establish pixel correspondence between the two images. In other words, for every pixel $$(x_i, y_i)$$ in image $$I$$, we need to find it's corresponding pixel $$(x_j, y_j)$$ in image $$J$$. Suppose we have magically found these correspondences, we can blend the images in two steps. First, we need to calculate the location $$(x_m, y_m)$$ of the pixel in the morphed image. It is given by the following equation

Second, we need to find the intensity of the pixel at $$(x_m, y_m)$$ using the following equation

That's it. We are done. Now, Let's go and vote for Trump. Kidding! Just like Trump, I left out some important details. Finding a corresponding point in image J for every pixel in image I is about as difficult as building a 10 ft wall between the United States and Mexico. It can be done, but it is expensive and not really necessary.

But it is very easy to find a few point correspondences. For morphing two dissimilar objects, like a cat's face and a human's face, we can click on a few points on the two images to establish correspondences and interpolate the results for the rest of the pixels. We will next see how Face Morphing is done in detail, but the same technique can be applied to any two objects.

Morphing two faces can be done using the following steps. For simplicity, we will assume the images are of the same size, but it is not a necessity. 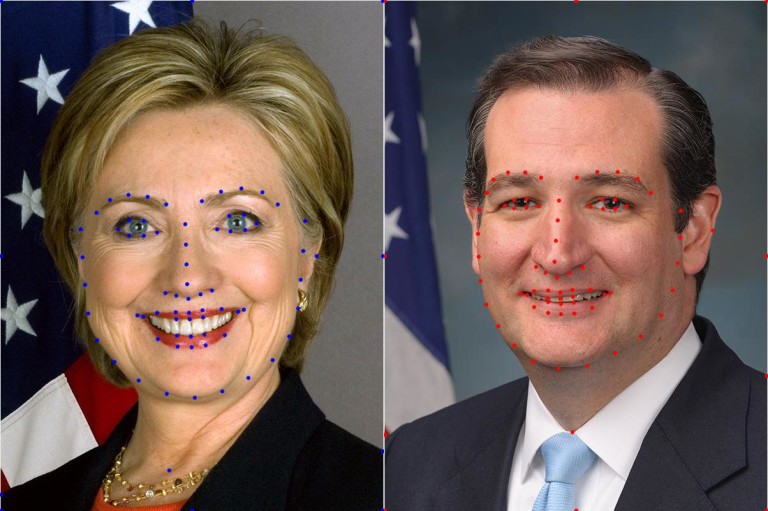 Let's start by obtaining corresponding points. First, we can get a lot of points by automatically (or manually) by detecting facial feature points. I used dlib to detect 68 corresponding points. Next, I added four more points (one on the right hand side ear, one on the neck, and two on the shoulders ). Finally, I added the corners of the image and half way points between those corners as corresponding points as well. Needless to say, one can add a few more points around the head and neck to get even better results, or remove the manually clicked points to get slightly worse (but fully automatic) results.

It shows that points 38, 40 and 37 form a triangle and so on. The triangulation is shown on the two images below. 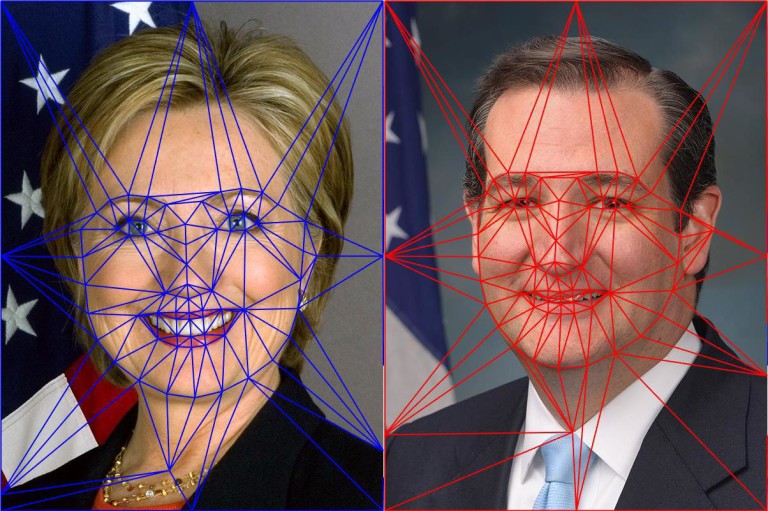 Notice the triangles in the two images capture approximately similar regions. We had started with point correspondences and now, because of triangulation, we have triangle (or region) correspondences.

To understand the description below better, download the code and images by subscribing to our newsletter here.

We are now in a position to intelligently blend the two images. As mentioned before, the amount of blending will be controlled by a parameter $$\alpha$$. Create a morph using the following steps.

The results of applying the above technique are shown below. The image in the center is a 50% blend of the image on the left and the right. The video on the top of this page shows an animation with different alpha values. Animation is a cheap trick that hides a lot of flaws in a morph; Senator Ted Cruz would love it.

Most facial features are very well aligned. The part of the image outside the face is not so well aligned because we have fewer corresponding points in that region. One can manually add additional points to fix mis-alignments and get better results.